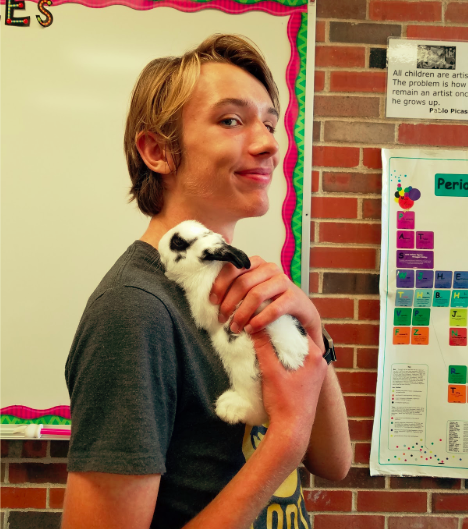 Buster Barnhouse sits in his hutch, his small black and white body crouched down in his loft as he cleans himself. His tiny paw reaches up to pull a slender black ear down to his mouth where a bright pink tongue flashes out. Buster is a five-month-old Netherlands Dwarf Rabbit, a new edition to the Hickman population, and he is serving as the EEE therapy animal and mascot. Mrs. Heidi Barnhouse, his handler, is beginning her first year as the Gifted Education Specialist at Hickman and was not expecting to have a therapy animal in her classroom until earlier this summer, when her dogs ransacked a bunny nest in her backyard. The event saddened Mrs. Barnhouse and her husband enough to prompt her to go out and get a rabbit of their own. After extensive research, Mrs. Barnhouse went out to choose a bunny and “the minute I saw him he just had this great personality and he was just adorable” she said. It was clear to her that this was the right rabbit for her classroom.

The process of bringing an animal into the Hickman building is a complex one. Mrs. Barnhouse had to answer a slew of questions regarding Buster and his role in the classroom. Barnhouse replied by saying Buster is intended to “create a sense of comfort and well being for students who are experiencing a high amount of stress.” Extensive research has been done on the benefits of having therapy animals in classrooms. According to petsintheclassroom.org, having a classroom pet or therapy animal in the classroom helps students develop a sense of empathy and releases stress. Barnhouse jokingly referred to the latter as a “Buster Break”.  Mrs. Barnhouse also noted that exposure therapy animals is especially important for gifted students who are often enrolled in difficult classes and often struggle with social-emotional issues.

The response from the Hickman population has been overwhelmingly positive and Mrs. Barnhouse attributes this to the idea that having Buster around “adds that something extra to the school day; it makes coming to school feel better”. Many students, such as junior Hunter Bailey, would agree. Hunter is a gifted student who has several hours worth of homework each night. When asked if Buster relieves his stress, Bailey replied with an emphatic yes, saying, “since gifted students are usually taking harder classes or doing more challenging things, sometimes the animal can be a nice escape for them. It can be comforting.” 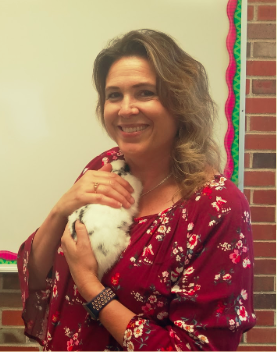