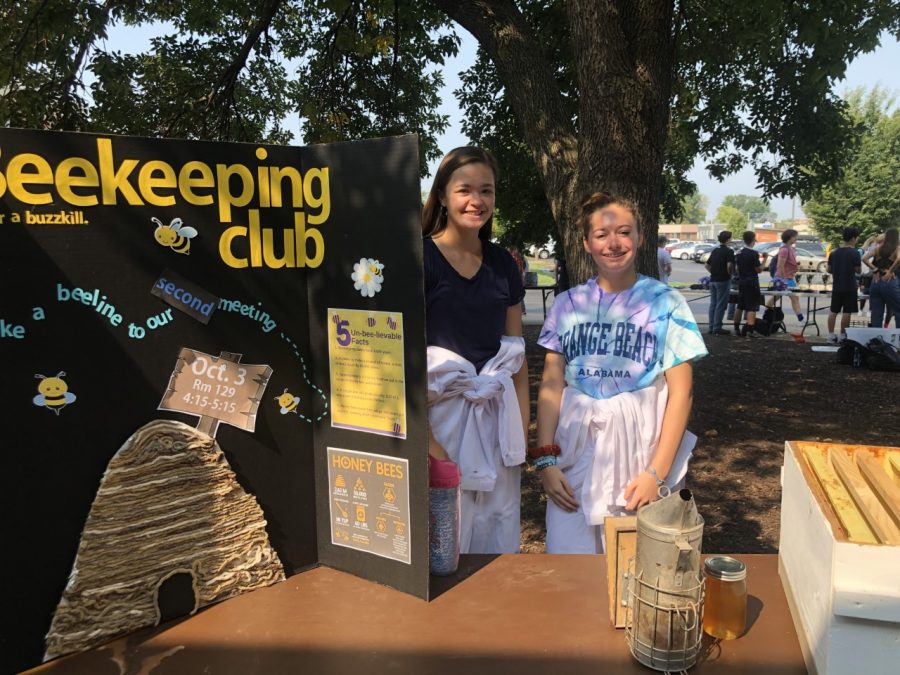 Despite a postpone, this years QPFest carried on as one of Hickmans biggest traditions.

QPFest is one of the many highly anticipated school-wide events here at Hickman, though students had to wait a week longer than usual after it was postponed for a week due to a thunderstorm. QPfest is a two-day event that showcases Hickman’s many clubs at the beginning of the year to garner student interest.  a fair that displays all the diverse clubs that Hickman has to offer, and provides special treats for lunch in the form of various local food trucks. An example of the true diversity in Hickman’s extracurriculars is the brand new Beekeeping Club, which is, according to founders Hannah York and Gracie Devini, “the only beekeeping club in the state of Missouri.” York and Devini said that through the club, they’ll be “learning how to beekeep [and] how bees are impacted in the environment.”

Another club that encompasses Hickman culture is H.O.P.E club, which stands for “helping our peers everywhere.” Leslie Frymire, an involved member of the club, said that “anyone who wants to take a stand and get involved with the community by volunteering and raising awareness” would be a good candidate for H.O.P.E club. There were many other clubs in the same vein, who were also looking to spread awareness, fundraise, and volunteer, like GGO. GGO stands for “Giving Girls Opportunities,” and club members Carly Keisling, Kate Devine, and Alex Loesing explained that through GGO, they “help fundraise money for girls in Guatemala that do not have as many opportunities that people take for granted.” Clubs like these are just the tip of the extracurricular iceberg, though– Hickman boasts tons of other organizations, and they’re all unique, whether they focus on music, student activism, or even online gaming.

The next part of QPFest is the fair. This is where clubs are able to set up booths during an extended lunch period and students can learn about all the ways they can get involved at Hickman. The QPFest fair was originally scheduled for Friday, August 30th but due to heavy rain was rescheduled for next Friday, September 6th.

Fortunately, it could not have been a better day for QPFest. The sun was shining high and the sky was clear, which allowed for all the booths to be set up outside in the front entrance of Hickman. When student walked outside they were immediately greeted by loud chatter, catchy music, and the lurring smell of Lilly’s Cantina food truck. As students walked around to the over 40 available booths, there were posters, banners, candy bowls, and trophies to show off club accomplishments. Enthusiastic students greeted anyone who would come near and seemed to have endless amounts of flyers.

QPFest is always an energetic environment, and an event that a lot students look forward to. Senior Erin Green, the Vice President of Key Club, explains why she likes QPFest

“Its really cool to see all the clus next to each other to really see how many clubs there are at Hickman,” said Green. “ I also enjoy getting to talk with underclassmen to get them interested in getting involved.”

Green has been a part of Key Club all four years of high school and she attributes QPFest for getting her to be active within Hickman. “It really gave me an opportunity to see all the possible clubs I could join and kind of made it less anxiety-inducing than having to walk into a club for the first time where you may not know anyone,” said Green.

Moreover, QPFest is a way for clubs to interact with people, which has allowed them to grow.  Senior Amy Lemuz-Guerra, the editor-in-chief of Hickman’s art and literary magazine The Hickman Review believes this interaction at QPFest  has helped the Review. “This is a way we get to promote the magazine in a way we wouldn’t normally be able to” said Lemuz -Guerra. “We get to actually explain in person what the club is about, and they get to see our passion, which gets them [students] interested.”

Being involved in clubs and organizations is a part of the high school experience, and QPFest is the place where it all begins. Lemuz-Guerra summarizes why it is so important to Hickman. “At QPFest you get to see the legacy that others have left of their club that they started many years ago, as well as the start of new ones. It is an ongoing representation of Hickman’s tradition of diversity and excellence.”