Put Me In, Coach– Debate

The face of composure 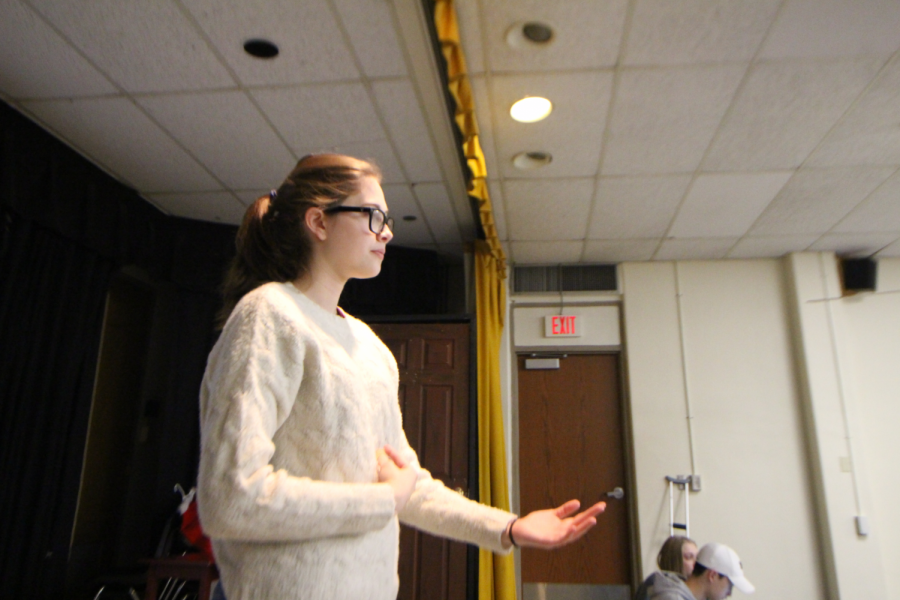 The silence in the room is deafening. Faces are plugged in focus with mines turning like mine never could. I sit in the center of Ms. Gerling’s classroom, amongst some of the best debaters in Missouri. I am here to take on the gauntlet that is Hickman High School Speech and Debate, aka Team Composure.

This is not my first time at a debate practice. Many years ago, I went to a workshop at Rockbridge and spent a week debating about Russian sanctions. It was one of the hardest and most confusing things I’ve ever done. Here I am, surrounded by people who do it every day. That is every Wednesday.

The previous weekend, Team Composure competed at Mexico High School, placing 5th out of all the schools. “A tournament consists of many schools, all with students entered in different events,” says Miriam Saidi, 12, who has been in debate for all four years of high school, “People go into different classrooms to compete for each round and as judges submit ballots, winners are posted and rounds continue until awards.” Although it sounds grueling, “there’s usually a lot of downtime which consists of everyone eating snacks and playing games.” After a win, the team often visits Steak ‘n Shake. “Even though everyone’s tired, it’s a fun experience and is a ritual of ours.”

Now, we sat in the Little Theater and practiced extemporaneous speaking, extemp speech for short, a form of limited preparation debate. We were given a topic as we came into the room, and were asked to prepare a short intro to give supporting our stance on the prompt, which was ‘Should Donald Trump be impeached?’.

Eyra Mellem, 11, was the first person to deliver her speech and was cut off almost immediately by Coach Heuther for leading with ‘um’. “How do you lead with a filler word?” She amended her statement and quoted Gandhi, delivering her stance and began to move about the stage before being asked to sit down. Most debaters led with a quote, their hook, and followed with their main points to defend their claim. However, one debater, Stanley Thorpe, 10, supported his claim by quoting Dr. Martin Luther King Jr as saying “F**** no.” He was promptly asked to sit down.

Coach Heuther surprised me with his unwillingness to hold back with his criticisms. He scolded one girl for her stance during an otherwise-solid speech. I wondered why anyone would want to stay in debate under such intense pressure and ridicule. Lindsey Oberle, 11, said “The satisfaction of working on a piece for a long time and then getting 1st or 2nd in a tournament is such a good feeling that it would be crazy not to want to keep doing it. Even when a tournament is unsuccessful and I feel like quitting, I just remember all the people supporting me and that they will help me become successful again and that pushes me to continue.”

After extemp, Coach Heuther asked the debaters to fix the things they botched in the previous tournament at Mexico High School so they could improve in advance of the upcoming tournament at Pattonville. With only a week turnaround, I’m astounded these high-achieving students are able to revamp a failed speech. “I try to take one or two days a week to work on my pieces, but this doesn’t always happen, so I make sure the week before I compete with a piece to run it constantly,” says Oberle. Preparing looks different for everyone, but Oberle “I have to start practicing only where no one hears me because at first, it’s rough. Once it’s tournament ready, I perform my piece in front of people and get feedback. Then I take the feedback and practice by myself. This cycle goes on throughout the whole tournament season.”

Although nervous to perform in front of others at first, Lindsey loves her team members. “The team means so much to me,” she says. “They have helped me grow more comfortable with my ability to perform, through their encouragement. Also, I have bonded with so many people throughout the speech and debate seasons. Many of the people on the team are some of my closest friends.”