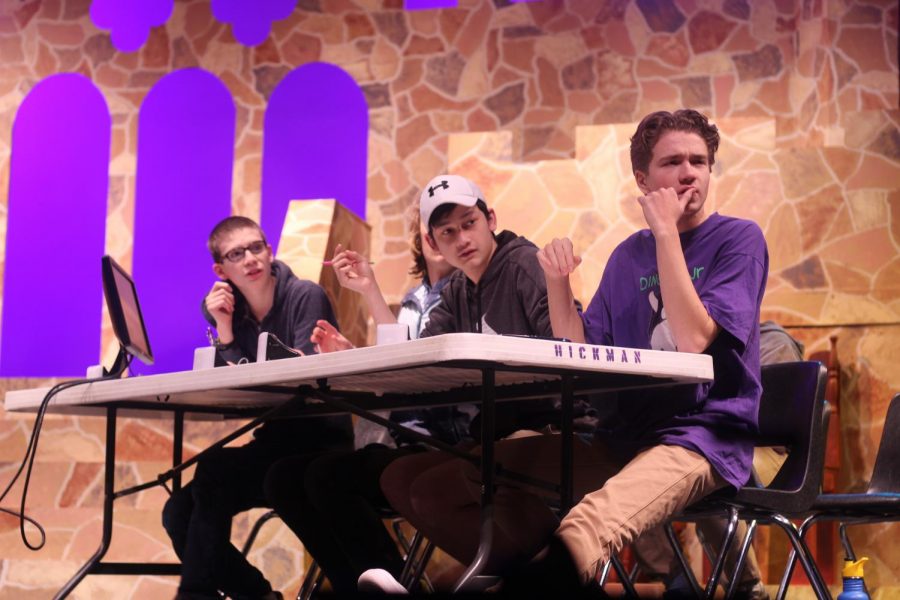 Two boys stand at the front of Hickman auditorium, engrossed in an intense conversation while hundreds of Kewpies shuffle in to fill the seats. While most of these students are happy to be out of class for an hour, these two are thinking bigger than that. Isaac Stiepleman and Ben Cohen are here to win.

These two make up part of The Jew Crew, one of three teams competing to be this year’s QuizBowl champions. They are playing the first of two games of the day against I’ll Figure This Out Later. Whoever wins this game will move on to play Lego City Rescue Control, a team currently undefeated, for the final round.

The Jew Crew is made up of Isaac Stiepleman, Hunter Bailey, Ben Cohen, Ben Edidin, and Adin Aberbach. All five members are juniors. “I’m excited,” says Stiepleman, team captain of the Jew Crew. “Last year has been weighing on my mind. For anyone who doesn’t know, the Jew Crew, after cruising through preliminary rounds, suffered a pretty embarrassing loss to a senior team. We weren’t on top of our game at the beginning and it wasn’t great, but I’m feeling good now. I’ve got a great team around me. I really think we’re getting ready to go all the way.”

The first game ended with a win for The Jew Crew. The final score was 105-15. I’ll Figure This Out Later is made up of Teak Carrier, Grant Kaplan, and Ethan Sims, all sophomores, as well as junior Eric Kvam. Of their loss, team captain Carrier said, “They buzz fast. Also, they’re all really good.” This led to the Jew Crew sitting across the aisle from Lego City Rescue Patrol, anticipating victory.

LegoCity Rescue Patrol (LCRP) is another all-junior team, with Evan Loehr, Brandy Lunchbox, Alec Hume, Danny Saab, Logan Pescaglia, Christina Hua, and Richard Weng. “I think we deserve to win because we’re not all Jewish dudes,” says Loehr, the team captain. “We have a girl.” In fact, Christina Hua is the only girl to compete in either of the 2020 Quizbowl final assemblies. “I just feel like a boy,” she said. When asked what sets LCRP apart from the other teams, Loehr replied simply, “We haven’t lost.”

After a half-hour of answering questions, The Jew Crew came out on top with a final score of 120 against Lego City Rescue Patrol’s -20. Of his team’s decisive victory, Ben Cohen said: “My teammates did an incredible job and I’m very happy to be part of this team and to have competed with Hunter for the last three years.”