Friday Night Game Versus Battle Canceled Due to COVID-19 Concerns 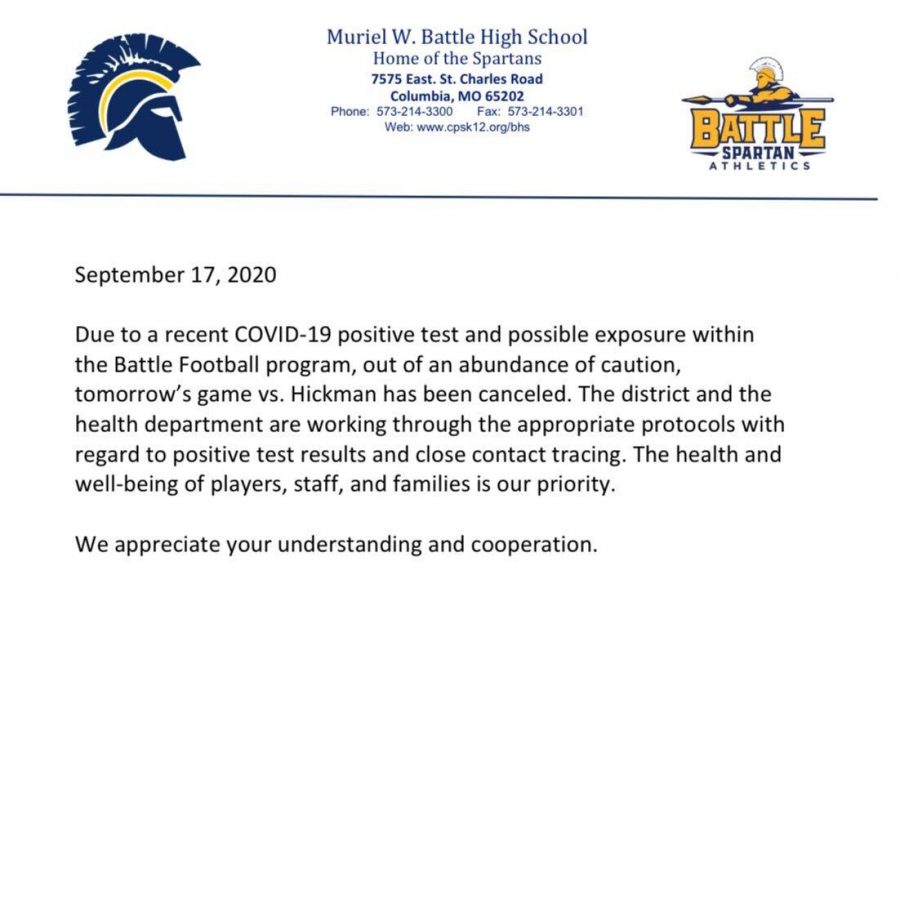 The home game scheduled for tomorrow, Friday, September 18th against Battle High School has been canceled due to a positive COVID-19 test and possible exposure in the Battle Football program according to a tweet by the Battle High School Athletic Department (@BattleAthletics) published around noon this afternoon. This is the first football cancellation in Columbia Public Schools this season.

This is breaking news and this story will be updated.

This game was going to be the first crosstown game of the season for the Hickman team. The next two games, both scheduled for the 21st, are also against Battle. Coach Alvis, the head coach of the Hickman Football team, says the team is waiting to find out if the JV game of that day is canceled. He is hopeful that they will receive this information over the weekend.

Addison Hill (12), who plays defensive line, says the team is upset but understands the potential of cancelations throughout the season. “This was one of the games we were most excited to play,” said Hill. “For me personally, Battle is our biggest rivalry and Hickman Football has never beat Battle so it’s really disappointing [the team is] not getting that chance this year.”

The Hickman Athletic Department remains confident that the Football season will continue with minimal alterations. “I want to believe we will play [Rockbridge],” said Alvis, “of course anything can happen.”

Players like Hill are confident in the safety precautions being taken by the district’s athletic departments and are not concerned about the risk of COVID-19 while playing their sport. All CPS sports teams are following the same safety protocol which includes temperature checks prior to entrance, health screening questions, and athletes wearing masks any time they are not playing.

The athletic department is currently looking for a replacement opponent for tomorrow’s game according to Alvis.

We are talking with Hickman High School’s main office and at this point, there is no Football game scheduled for tonight. They are still Holding out hope that another varsity team will be able to come here and play or that the team will be able to travel somewhere else. Hopefully, by noon we will hopefully know for sure.