A New Normal: An Inside Look at Volleyball During COVID-19

Senior players share how this season has looked different and what it means to them. 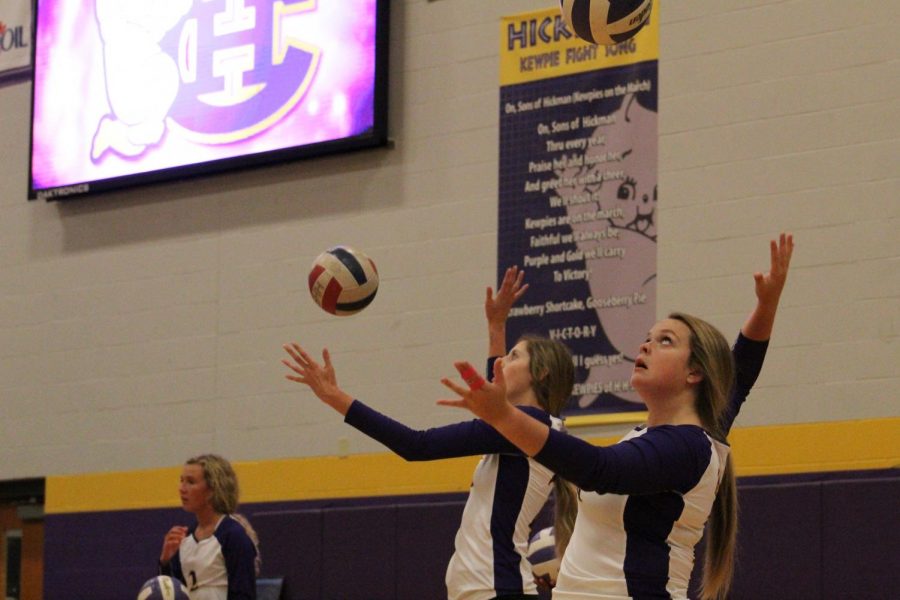 Last Tuesday night, September 15th, was senior night for Hickman Volleyball. Hickman’s varsity team beat Hannibal in three sets. Many things have changed in sports due to the COVID-19 guidelines, and Hickman’s seniors can feel the difference this season. “It’s kind of a bummer because we don’t get our usual crowd, and the excitement of the games as much,” said Avery Zerrer (12). “But it’s still our senior year and it’s still fun.”

The seniors of Hickman’s volleyball program can all agree on that.

Despite the uniqueness of this season, it’s clear that the Hickman Volleyball Team is more than happy to be playing this year. It’s not the season any of the players had hoped for, especially the seniors, but they have made the best of it. “The season has kind of shown us how appreciative we need to be towards being able to play because not everybody can,” said Shannon Yockey (12).

Sidney Yaeger (12) concurred. “We are all very happy to be able to at least do something. Even though the crowds are smaller. … It’s still fun, and we get to do what we love.”

Many of the players mentioned the crowd size being smaller due to COVID-19 guidelines, and Coach Gunn acknowledged this saying: “It’s a little harder to get energy on the court when there’s not as much crowd noise. We’re not used to having big crowds, but it is a smaller crowd than we’re used to.” Tuesday night, the players carried the energy a large crowd usually brings, shouting and cheering loud enough to fill the gym. The energy was definitely lower during the start of the match, but once they got going the players made their own noise.

The crowd size isn’t the only difference COVID-19 has caused. Players must wear their masks at all times except when on the court for both games and practices. The team had to quarantine for two weeks prior to the start of the season, as two players tested positive for COVID-19. “Being in quarantine for two weeks, I think that put a halt in all of us,” said Adelaide Becking (12). “That’s a lot of days off.”

The seniors of Hickman Volleyball have definitely left a mark on the underclassmen. Harper Zerrer (10) commented on what the seniors have meant to the Hickman program: “They’ve been a great joy.”

“They’re always really loud and positive,” Taylor Graham (10) added, “all five of them. Sidney has a really big voice, and Shannon makes you feel welcomed all the time, she’s like the mom.”

Coach Gunn admires the work his seniors have put into the team. “They’ve been the leaders since November of last year,” he said. “When we came back, they didn’t miss a beat. They’ve been great leaders for our program.”

This season may look a little unusual, but Becking comments: “In the grand scheme of things, this season really isn’t that different.” That’s good news to hear from a senior who’s season seemingly got flipped upside down. Hickman’s Volleyball Program is resilient, and this season is just another chance to prove that.