A Tradition Carried On

Mizzou ROTC perseveres in the face of COVID-19 to uphold the beloved cannon-fire tradition. 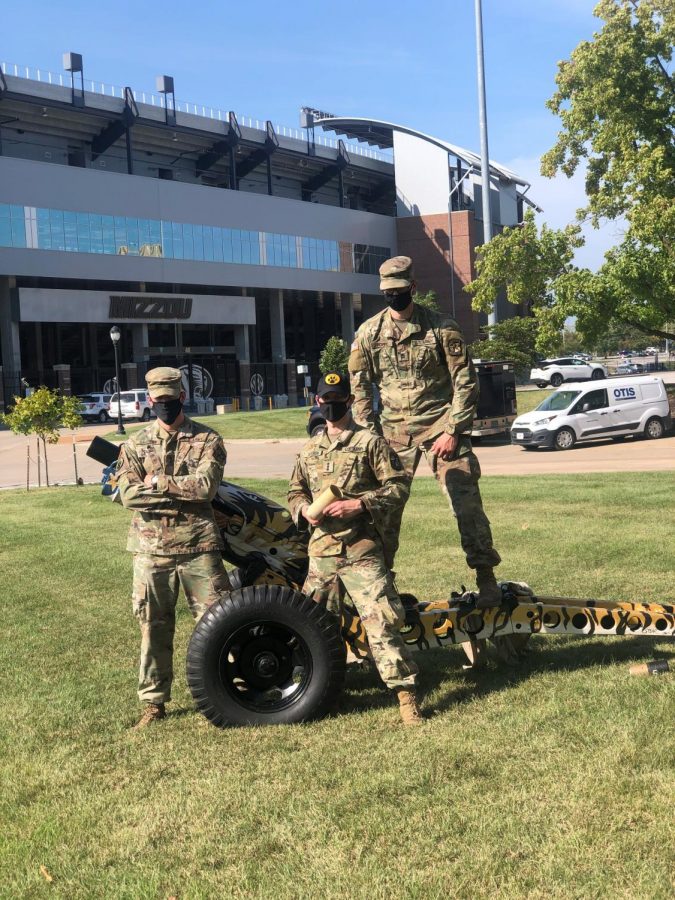 Cadet Grayson, Cadet Steger, Cadet Grayson are preparing for the new format of the tradition.

Every year, Mizzou fans watch the football games in hopes of seeing Mizzou’s ROTC cadets do their push-ups and shoot off the cannon after every Mizzou touchdown, but this year many were disappointed. Due to COVID-19 safety measures, the cadets were not allowed on the field. However, a tradition that has spanned well over 100 years was not going to be lost to the global pandemic. The Mizzou ROTC was determined to continue the tradition of shooting off the cannon no matter the obstacles.
“We want to create a sense of normalization in this hectic time,” said Cadet Steger. To try to maintain the tradition, the cadets and leaders came up with a solution: they were going to shoot the canon outside of the field. Doing this allowed for fans to come take pictures with the tiger-painted canon and witness the cadets in action. Even though there were many disappointed fans, the ROTC program made the best of the situation and persevered as their instructors train them to.
Master Sergeant (MSG) Olvera is one of the leaders of the ROTC program and uses his past knowledge in the service to clean out the Mizzou cannon in preparation for the first shot. MSG Olvera has been working on the cannon crew as a leader and mentor for many years and enjoys being around the technology such as the well-decorated cannon. The tradition of pulling the cannon for the pre-game warning, the start of the game shot, and touchdowns date back years, and luckily the university has an excited group to continue the well-known tradition. Keeping a “normalization” was extremely important to the cadet and leadership staff especially when so much has changed over the last few months. They believe that this will help the students see something that happens every year and get excited that it did not disappear like some of the other traditions surrounding Mizzou athletics. Mizzou has been extremely supportive in the process of having the cannon and wants to ensure the safety of its students and staff, which the ROTC respects.
Cadet Steger, Cadet Grayson, and Cadet Poppe were preparing for the intense game between Mizzou and Alabama on home turf— the first game of the season with the cannon dilemma. Being off the field has been a difficult transition for these cadets because according to them, they are supported and encouraged by the campus, making them want to give their support as well. The cadets want to uphold this tradition despite hardships and overcome the challenges created by these uncontrollable circumstances.
The cannon is placed at an appropriate and safe location for the game and has no live ammunition. Even with no live ammunition, the cannon releases smoke after shots and the ROTC program wants to make sure everyone enjoys the tradition and is comfortable. Cadet Todd, one of the members that help with the cannon says he “enjoys supporting the games… but it’s disappointing to not see any tailgaters cheering us on this year.”

Mizzou’s ROTC program will keep on persevering and finding creative outlooks on how to uphold a positive and encouraging tradition. Hopefully, Missouri sees green suits and a yellow canon on the field soon, but until then we can rely on Mizzou ROTC supporting the football team and the school off the field.