The P&G sits down with the Hickman Debate Team and the Executive Director of the National Speech & Debate Association to discusses the first presidential debate of 2020. 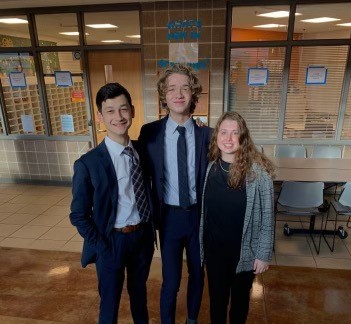 On Tuesday September 29, 2020, the first presidential debate of the 2020 election was held in Cleveland Ohio. Presidential debates typically include significant discussions of ideas and previews of policy, they have set rules and codes of conduct, and they can sometimes be so civil and stiff they feel a bit dull. This year’s first presidential debate was not typical. This first presidential debate was hectic and chaotic. According to the Washington Post, Biden interrupted 22 times and Trump 71 times. Amidst the insults, side-eye, and exasperated sighs from the moderator, it became clear that an expert was needed, someone who spends hours learning the ins and outs of how we should debate and why debating is such an important process for both our own personal understanding and for our democracy: high school debaters.

One big conversation coming out of the presidential debate surrounded the rules each candidate agreed to going into the debate. The original set of terms the candidates agreed to was a six-segment debate with 15 minutes spent on each. The segments would begin with the moderator posing a question, and the candidates would be given a two minute response period, followed by a chance to respond to their opponent. The Moderator, Chris Wallace of Fox News, reminded Trump and Biden of the terms on multiple occasions, once saying “Mr. President, your campaign agreed both sides would get two-minute answers, uninterrupted.”

Hickman Debater Justin Eddy spoke to the different types of debate and drew a comparison between the styles of Policy Debate and Presidential debating, “There really isn’t a true structure, especially when the commission on debates allows for an open forum for 10 or 11 minutes, but in the type of debate we do in high school, it’s very structured.”

As Executive Director Scott Wunn explains, clear guidelines like this are in place to help give clarity to everyone involved, “There certainly have been disqualifications that have occurred in high school debate. But those are rare because everyone agrees to the rules. Usually, it is more like where one person put forward a piece of evidence and claimed one thing but if you read the rest of the material, you realize it means something else.”

With specific rules, it is clear if they are broken and the punishment at the high school level can be losing a round or getting kicked out of a tournament. Wunn acknowledged that disqualifications are not common, in most debates the real consequence is receiving a lower score. But the results are felt immediately. Stiepleman went on to say, “Even if Trump or Biden breaks the rules, or a candidate breaks the rules, there’s no real punishment for doing that. Maybe the American people view them worse, but I don’t really think on a large scale it’s going to swing a bunch of people’s votes.”

Ben Cohen, his teammate, didn’t agree. “In a high school debate we’re just trying to convince a judge to give us a win and we’re trying to come across as slightly better at debating than the other person and we get to move on in the tournament. These guys are trying to convince the country that they are the more presidential person, that they’re correct, or at least that’s what we assume they’re trying to do.”

Even as President Trump and former Vice President Biden tried to convince the American people of their capability for leading the nation, their personas seem to get in the way. This is another area that intersects with high school debate, albeit with more unwritten rules.

Mellam offered an example saying, “There definitely are a lot of faux-pas. There are things that aren’t written rules but we don’t do them. One of those things is we don’t look at each other during cross-examination.” Making an example of the presidential debate she continued, “Like in the presidential debate, trying not to speak over people. Things definitely get heated and we do yell at each other a lot, but it’s kind of disapproved of.” Eddy agreed with Mellam on this point as well about professionalism and how you act during a debate, “even though there aren’t written rules, there are definitely rules that are understood by everyone on how to proceed through debates.”

This has led to many questions about what action should be taken in the next debates if there are to be more. The Commission on Debates has already agreed to change the layout of the upcoming debates to have a more structured debate format so the discussion will be more organized.

The role of a moderator or judge in a debate is also important. Wunn said, “A moderator has the best assessment of time allocation during the course of the debate. So the moderator needs to be the one who truly understands what the goal of the topic area and information is.”

Wunn went on to clarify that the moderator also has the responsibility to ensure that in all types of debate, the debaters and those watching are seeking the truth.

“A moderator ought not be an agenda seeker, They should not get in the way of that core thing which is the ultimate goal of the debate: seeking out the truth of the topic. However, if a moderator does not ask the appropriate follow-up questions, that could directly affect that clash of ideas and that ultimate goal of seeking the truth.”

Along these lines, there have been many discussions as to whether or not the moderator should have the power to cut off microphones when a participant is speaking out of turn, but no final decisions have been made on this by the Commission.

Mellam commented on the possibility of cutting off microphones being helpful, “I think it has the possibility to, but we also thought having agreed terms by campaigns at the beginning of debates would create more structure and smooth conversation. It really comes down to whether or not the candidates are going to cooperate. Because they all understood that in a presidential debate you have your time to respond and you shouldn’t talk over your opponent, but that kind of went out the window. I think it could work if (the moderator) could turn off mics, but I also think some people might start yelling.”

Cohen added, “The only way we’re going to be able to facilitate any semblance of what we typically consider to be a fair conversation in which there is a free flowing of ideas, is going to have to be to take some more authoritative steps.”

Steipleman also pointed out an effect of this move saying, “I think the ripple effects of engaging in such an interventional action is that it will be seen as yet another partisan tool that can be utilized whenever a biased arbiter wants and not as an independent moderator trying to get control of the debate.”

Cohen also spoke to Chris Wallace’s performance as the moderator saying, “I don’t think there was really anything he had at his disposal to use that he didn’t. I don’t think given the tools he had he is really at fault for anything.”

When asked if the debates were helpful to the American people Wunn said, “I think it’s a privilege for a candidate to be in the position to be able to share with the American people their plans or beliefs on the way that the most powerful office in the world ought to be run and the way that the policy ought to govern our democracy. I think that is a privilege. I think that it is a right as an informed citizen to be able to have access to debates of our candidates, so that we can, if the debate’s done properly, get core questions answered, so we can exercise our greatest right, which is our right to vote.”

Eddy added, “Undecided voters stand to lose the most if we talk about canceling presidential debates, so obviously, there are adjustments we need to make within our current system to make those more beneficial to everyone.”

And if any of the candidates are reading this, perhaps there is something they could learn from high school debaters as well.

Speaking to the character of student debaters, Wunn said, “People are pushing back on their perceived lack of decorum on the highest level, to make sure it isn’t occurring at the local academic club. Our judges are more cognizant of it, our coaches are more cognizant of it, and my highest praise right now is for the current high school and young college students, because I believe they are most actively involved in us treating each other the way that we should be treating each other: fairly and with kindness.”