The CPS School Board votes to bring preK-5 back four days a week, but keeps all Middle and High School students in virtual learning for now. 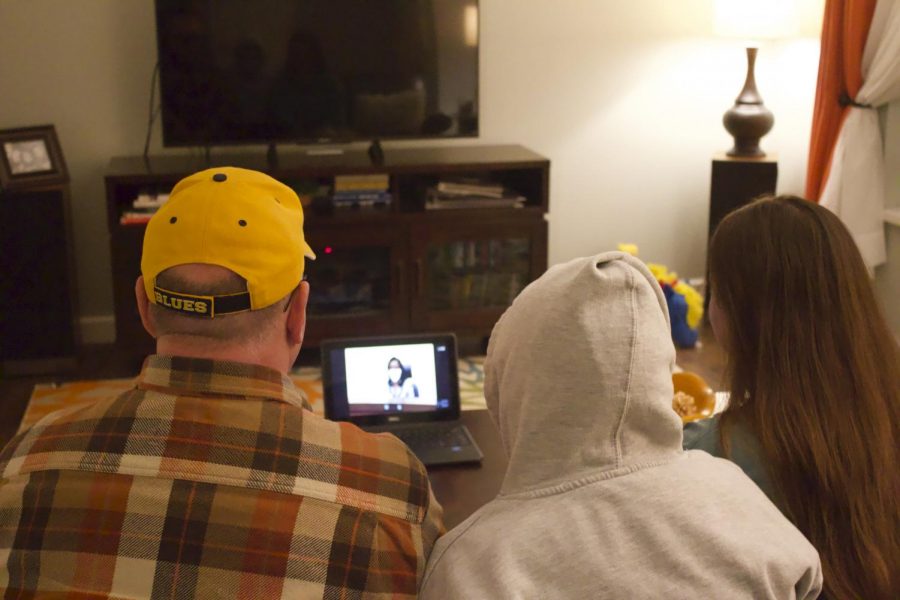 A Hickman family watches on as the school board discusses if and when CPS classes will resume in-person.

While the Hickman Review met via zoom, the orchestra got in tune, and the JV football team faced Raymore-Peculiar on Monday night, a couple dozen of CPS parents, teachers, administrators and members of the public sat three feet apart and peered over their masks while over 1,200 others tuned into CPSTV at one point or another throughout the evening as the CPS School Board gathered for their monthly meeting. The evening began at 6:30pm and over four hours later, at 10:34, the board approved beginning preK-5 to return 4 days a week (Monday, Tuesday, Thursday, and Friday, with Wednesday remaining virtual) starting October 19th of 2020.

Since the middle of August, Columbia Public Schools has been tracking the average number of cases of COVID in areas served by Columbia Public Schools over a 14-day period. At its highest on September 7th, just before the first day of school, CPS’s COVID tracker hit 91.4 cases per 10,000 people. On September 21st the COVID tracker dipped below the original hybrid threshold at 49.2 and it has remained below 50 since then. As of October 12th, the CPS COVID Tracker was at 33.3.

School board member, Theresa Maledy, believes the recent trends in COVID cases show promise for a safe in-seat start. On June 25th, there were 32 positive cases among CPS Staff and Student body. Today, there are 6.

“I know,” said Maledy, “that is still too high, we want that number to be zero. But we are setting a bar that’s going to be nearly impossible. We are starting to see data from schools that are starting to be in session. Schools are not considered a “spreader.”

School board member Blake Willoughby also mentioned that he had been moved by the COVID numbers, recognizing that roughly half of all COVID cases can be attributed to college age students. He mentioned that roughly 40% of all positive cases fell in the age range of teachers, but only 7% of the positive cases applied to the age range of CPS students.

“What I am seeing when I break these numbers down for the K-5 age of kids, is that the numbers are even lower,” said Willoughby, “Other entities are seeing these numbers go down and are choosing to do different things, but I do feel that our K-5 kids are the priority.”

Board member, Dr. Della Streaty-Wilhoit also spoke of priorities, “Our ultimate goal is to bring the children back safely. If that is not done we hold the accountability. ”

Kathy Steinhoff, Hickman math teacher and Columbia Missouri National Education Association President presented earlier in the evening on a different agenda item, but also spoke to feedback from teachers who responded to a CMNEA survey.

“Although teachers are also eager to be with their students, there are large concerns around safety with the current positive COVID rates.  ⅔ of the elementary teachers we surveyed do not feel safe with the full class 4-day return on October 19.  This is likely because 71% of those teachers could not distance their students 3 feet apart in their classroom.  Likewise, 85% of our middle school teachers did not feel safe with a November 5 full class 4-day return, as 78% of them could not place their students 3 feet apart in their classrooms.  We require everyone in this room tonight to be seated 3 feet apart for safety, and yet we are considering a model that would not provide the same safety precautions for our students.”

While public health and safety were certainly what landed CPS students in this situation, it was not what made up the bulk of the conversation at the meeting.

One of the main points that shifted the conversation at the middle and high school level was the current academic performance on the first Interim Progress Reports (IRPS). Many students across the district have seen very low grades so far this semester. Fs were up by 53% in High School Core Classes, and increased by 224% in both Middle School and High School non-Core classes.

It was discussed that some of these lower grades might be due to issues with all teachers being required to use Schoology and the learning curve for teachers figuring out how to use this system that is new for some. The board was also reminded that IPRs are meant to be a wakeup call for the students and that oftentimes students turn in many of their missing items by the end of the semester.

“I would remind the board that the IPR is just a snapshot in time,” said CPS Superintendent Peter Stiepleman. “It is not part of the transcript and not part of the record. I would caution us not to make a decision based on an IPR.”

Dr. Jen Ruckstad, Assistant Superintendent of Secondary Education added that, “Small group student support plans are being worked on at both the high school and middle school level. Our schools are really getting into that data, looking at how we can support students now that we have some more tangible data.”

Ruckstad also noted that at one school in particular, she had spoken with a principal who quickly moved on plans to address the failing grades at their school. “They had department chairs in their office the next morning, they fixed reporting errors, they looked at the grades in addition to engagement data that has been collected in the past. They are not just sitting back thinking about how bad it looks. This is not something we are just ignoring.”

Unfortunately, not all students feel their problems have been heard by the School Board and are eager for a change.

Dalton Becklenberg, a freshman at Hickman spoke during the time for public comment, telling the board about how difficult this year has been for him. “It is harder to work on online school because I can not get the work I need. Instead I need to email my teachers and wait for them to reply. By delaying bringing the high school kids back until the end of the semester you are setting us all up for failure.”

Dalton’s mother, Meredith, also addressed the struggles her son has faced during virtual learning. “The attendance in my son’s zoom class is not 93%. On Tuesday it was three students on Zoom and the test was the next day. My son tells me he can’t learn online, ‘I need to be in-seat, I need to have them teach me, not me teaching myself,’ he says. I can’t stay at home and teach him as well as work and provide. The school board needs to be held accountable for each failing student.”

Though the problems with online learning students currently face are detrimental to the quality of their learning, there were some who spoke who suggested that the problems presented by COVID could be dire.

Parker Boone, a senior at Rockbridge High School, recognized his peers’ difficulties, but encouraged the board and those listening to see beyond their own personal struggles as well.

“I suffer from anxiety and understand how hard it can be. But this issue is bigger than our individual mental health issues. We are ignoring the CDC if we think that young children can’t spread COVID. Unless you have an 8th grade prodigy, they could spread this disease to their family. I think it is a very narrow minded take to say ‘my child won’t die from it, my child won’t get hurt from this.’ We need to think about the collective good.”

During the final minutes of the meeting, many parents and a few high school students spoke about their experiences with online learning so far this semester. Many were dissatisfied with this year because of how different it was from traditional learning and how independent it left the students. Others urged the board to remain cautious not to disrupt the virtual learning environment that many students are just getting used to.

The consistent theme running throughout most comments was a desire for things to just stay the same.  “There is a sense of normalcy that people are pinning for. But bringing kids back is not the kind of normal that we are thinking of,” said Chris Horn.

It was suggested at the start of the meeting that the decisions from tonight’s meeting are final for the semester, but Stiepleman and some members of the board seemed to agree that implementation and actual performance of such models would need to be responsive to the actual roll out of the model and any potential movement in COVID cases in the community. As board President Helen Wade said, “as a board member I don’t feel like anything when it comes to COVID can be set in stone.”

Tonight was probably not the last four hour board meeting. Conversations about when school will return, and what that return will look like, is sure to be the topic of conversation both in and out of our classrooms for many weeks to come. “Our enemy is not each other, it is a virus that has made us rethink every part of our daily lives,” said Steinhoff. “As much as we want schools to remain untouched for our students we don’t have that luxury while in the midst of a pandemic.”

To watch a recording of last night’s board meeting, visit CPSTV.