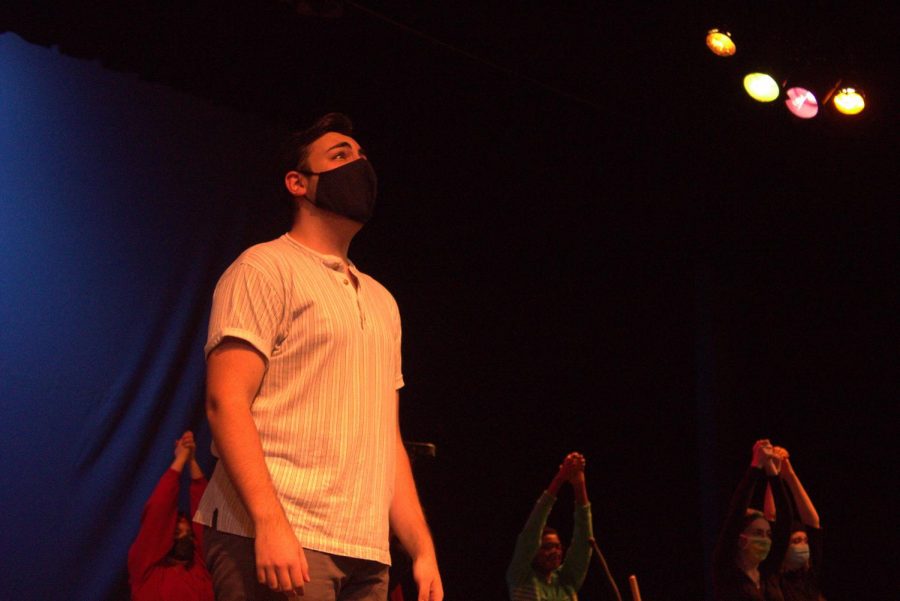 In a period during which films are being released to stream online due to limited physical seating, the field of live performances has been impacted just as much, if not more. This year, Hickman theatre did not give up on providing an opportunity for young thespians to act. “Godspell Jr.” was chosen as the piece for the first semester over its full-length counterpart, “Godspell”, because of new, unexplored conditions. “The format that we are producing it in is so new to us,” said Sarah Gerling, Hickman’s theatre teacher and director. “We have been rehearsing at school, but the performance is being filmed and streamed.” Due to the newness of the process, she and others “wanted to choose a show that was shorter since [they] knew [they] would have so much work to do with technology that [they’ve] never done before”.
Actors are being kept on a safe stage space through a number of precautions, including temperature checks upon entrance, prescreen questions, assigned seating, frequent sanitization, and employing the usage of aerosols to clear spaces when not in use. Rehearsals have been held with these safety measures daily for nearly two months, ensuring that students and staff remain in good health. “The biggest challenge is working to keep everyone as safe as possible. I feel really strongly about the safety protocols we’re taking. I don’t want anyone’s involvement with this production to be the reason for any spread of COVID,” Gerling said.

Each scene will be filmed separately so that breaks can be taken for further safety. However, scenes will not be refilmed to correct actor errors such as an incorrect line or wrong choreography. Viewers will still be treated to a first-take performance with each scene.
“I think that this virtual process has let me gain a new appreciation for live theatre,” said Dany Dakhlallah (12), who plays a young Jesus in the show. “Theatre is in many ways intimate with the audience. We as performers and actors feed off of the live reactions of audience members when performing.” He further reflected on the absence of mutual connection and perception, saying it has forced him to “lean into [his] imagination and be creative in allowing [himself] to provide the same performance virtually as if it were to be live.”

“Godspell Jr.” tells the story of Jesus in a retelling set in modern-day New York City. Based on the Gospel of Matthew, the show starts with At the behest of John the Baptist (David Haskell), young people giving up their jobs to worship Jesus Christ as his disciples. The apostles spread Christ’s message of love and tolerance as they dance ever closer to his betrayal and crucifixion. Describing the show, Anna Waters (12), a Stage Manager, said: “It is an invigorating approach to age-old stories of love, friendship, and community told through the lives of Jesus Christ and his followers: with singing and dancing!”
The final filming of “Godspell Jr.” began on December 4th and the project will be released virtually this weekend. Tickets are $5 for a stream for 1 to 3 people or $10 for a stream with 4 or more people. Purchase a ticket to receive a link and code to view one of three streams: Friday at 7 pm, Saturday at 7 pm, or Sunday at 3 pm. More information about streaming and purchasing tickets can be found here.