To the ISS and Back

Hickman seniors Brady Lunceford and Alec Hume are national finalists in a program called NASA HUNCH and their tech has the opportunity to make its way to the International Space Station. 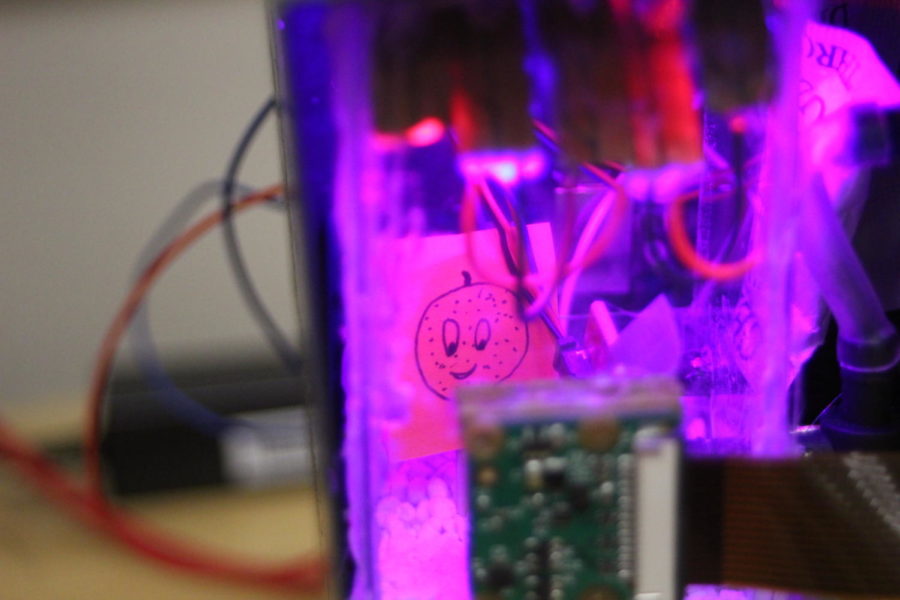 An ogre face taking up the space where a plant would normally grow.

A soft purple glows from inside the container, basking a tiny, ogreish face in nurturing light. The face is mounted in a bed of volcanic glass, soaking up imaginary moisture, taking the place of an imaginary plant. This is the basis of the 0GORS (Zero-G Organic Research Station) project, the Hickman team competing in a competition called NASA HUNCH, which aims to inspire students through project-based learning and by giving students the opportunity to participate in the “design and fabrication of real-world valued products for NASA” according to the NASA HUNCH website.

Hickman seniors Alec Hume and Brady Lunceford, along with Battle junior Jonas Ferguson, have spent the school year in their CASA class building a zero-gravity grow lab for the competition as part of the Design & Prototyping program of NASA HUNCH. Now, they are national finalists, ranking high among the 277 participating schools in the nation. The grow lab is intended to support a plant for the first 30 days after seed through a hydroponic system. Elements of their project have the opportunity to make their way onto the International Space Station (ISS) and would likely be used in a modular design to sustain multiple plants individually yet simultaneously. According to the NASA HUNCH website, 824 items have been flown to the ISS as a result of this project.

Lunceford, who took the class both semesters, began their project doing research on growing plants in space. “[It was] a solid six months of research and then recording in my notebook what seemed useful and trying to pull the ideas out of the research or see what would work,” said Lunceford. “That was a lot of front-ended work that I was the only one available to do.” In second semester, Lunceford was joined by Hume and the two began to put together a parts list for their project, “Shopping was actually a really interesting part of the process because we’re looking for a bunch of parts that are really mini and trying not to make it really expensive,” said Lunceford. The team was given a set of materials by NASA including a Raspberry Pi and Pi shield with an environmental compass, a fan, and a camera. In order to finish their project, they 3D printed a holding cell designed using computer-aided design, a plexiglass container for the plant, perlite volcanic glass as a growth medium, solenoid valves, and a way to transport water from a small reservoir into the grow container. This part of the project in particular stumped the team. Initially, they wanted to use a pump system to move the water into the chamber, but the amount of water was too excessive. With the help of Hickman science teacher Mr. Miller, the students were able to use capillary wicks— often used in gardening to provide plants with water at a slow, constant rate— in order to achieve their goal by running on a servo motor to connect and disconnect it from the chamber in order to control the watering schedule.

The biggest issue with their project, though, has been its size. The entire prototype is in a 10 * 10 * 20 cm box, meaning their design had to cram a large amount of technology into a tiny space. This required some creative thinking, including cramming a packet desiccant packet in between a tube and the back wall of the box. “There’s just so many problems, there’s no way to really make a 10 by 10 by 20-centimeter box that’s gonna grow a plant without having lots of problems,” said Lunceford. “This is the least problematic design possible.” Hume agreed, saying that though the challenges presented were hard to overcome, he thought they’d done well anyway. “Even though it’s not everything we wanted, it still feels good to have it,” said Lunceford.

The team found the most fun in building the prototype. “We were testing parts individually before we actually did any building,” said Hume. “We tested like all the electronics working separately; I went through and tested the whole fan solenoid air pump system without the actual box, then did the camera system and then put it all together. And then after that, we actually got the box printed.” After the main box was 3D printed, Lunceford described the building process as “taking out parts, soldering them together, and then stuffing them in the box”. The part of the project the team is the proudest of is the airflow system.“It’s something that I don’t think any of the other teams did: having the growth chamber be able to be sealed off completely and then unsealed and then also have airflow that’s controllable through it,” said Hume. “I think we actually designed it pretty well.” Lunceford agreed, saying: “The main reason for it initially was because we wanted to make sure we would still be able to read CO2 levels and after they lower, we’ll know exactly how much photosynthesis happened. We can flip both the valves, it’ll open the system up and turn on the fan and it’ll cycle all the air out and turn it back off and start collecting data again.”

On Wednesday, April 28th, the team will present their design one last time to a group of NASA engineers and a NASA astronaut alongside four other high school teams. After this meeting, the engineers will decide what parts of each design will make their way onto the ISS. In this way, Hume says, all five teams are winners. “Five teams get in, and every single team could get a part of their design on the ISS,” he said. “This is just for them to choose either a full design that they’re going to put on the ISS: one person wins; or part of which parts of each design get up there. So we all have technically won, they just might want to use other people’s designs more, or our design more.” Lunceford jokingly described it as a “who wins the most” situation.

Hume and Lunceford are happy to have been able to participate in the competition and believe more students should have the opportunity. “This project was a lot more difficult than regular school. But it also ended up being a lot more fulfilling and fun. And I definitely learned a lot more than I would if I had taken any other class,” said Lunceford. “Overall, I just feel like it’s been good for me. So I am glad I did it.” Hume found it similarly fulfilling. “I think this style of learning needs to be more common,” he said. “Getting to come in here and have a passion project and not have to ever be uninterested is amazing. Like everything I do no matter how hard it is, I’m going to be interested in it. It’s amazing. I recommend [CASA] to everyone.”